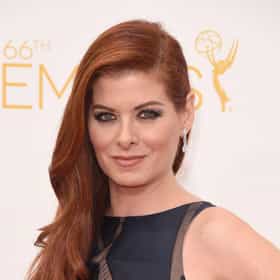 Debra Lynn Messing (born August 15, 1968) is an American actress. After graduating from New York University's Tisch School of the Arts, Messing received short-lived roles on television series such as Ned and Stacey on Fox (1995–1997) and Prey on ABC (1998). She achieved her breakthrough role as Grace Adler, an interior designer, on the NBC sitcom Will & Grace (1998–2006), for which she was critically acclaimed, receiving six Golden Globe Award nominations and five Primetime Emmy Award nominations for Outstanding Lead Actress in a Comedy Series, winning once in 2003. From 2007 to 2008, Messing starred as Molly Kagan, the ex-wife of a Hollywood film mogul, on the television ... more on Wikipedia

Debra Messing is ranked on...

Debra Messing is also found on...