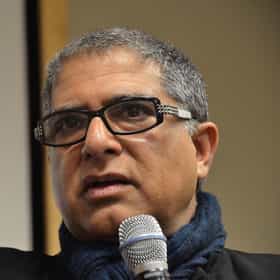 Deepak Chopra (; Hindi: [d̪iːpək tʃoːpraː]; born October 22, 1946) is an Indian-born American author and alternative medicine advocate. A prominent figure in the New Age movement, his books and videos have made him one of the best-known and wealthiest figures in alternative medicine.Chopra studied medicine in India before emigrating to the United States in 1970 where he completed residencies in internal medicine and endocrinology. As a licensed physician, he became chief of staff at the New England Memorial Hospital (NEMH) in 1980. He met Maharishi Mahesh Yogi in 1985 and became involved with the Transcendental Meditation movement (TM). He resigned his position at NEMH shortly ... more on Wikipedia

Deepak Chopra is ranked on...

Celebrities Who Practice Transcendental Meditation 111.5k VIEWS A list of celebrities, both big and small, who practice Transcendental Meditation. This form of mantra meditation, specifica...
70+ Celebrities Who Do Yoga 93.4k VIEWS Yoga is a physical, mental and spiritual exercise that strengthens your body and soul. Many famous actors, musicians, and pr...
Famous People Who Meditate 238.1k VIEWS Meditation is a practice that encourages the mind to slow down and also benefits the body and soul. Many famous actors, musi...
30+ Famous People of Indian Descent 111.3k VIEWS This list of famous people of Indian descent is loosely ranked by fame and popularity. Many famous celebrities are of Indian...
20 Famous ESFPs 96.4k VIEWS Many famous actors, musicians and politicians are believed to be ESFPs (Extraverted Sensing Feeling Perceiving). ESFPs are k...

Deepak Chopra is also found on...