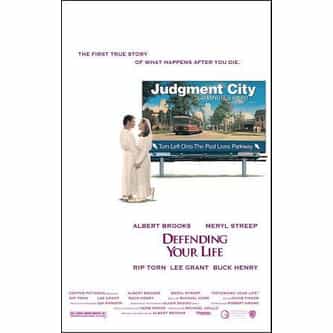 Tagline
The first true story of what happens after you die.

Defending Your Life is a 1991 romantic comedy-fantasy film about a man who arrives in the afterlife only to find that he must stand trial and justify his lifelong fears in order to advance to the next phase of life; or be sent back to earth to do it again. The film was written, directed by, and stars Albert Brooks. It also stars Meryl Streep, Rip Torn, Lee Grant and Buck Henry. The film was shot in and around Los Angeles, California. Despite its comedic overtones, Defending Your Life ... more on Wikipedia

Defending Your Life IS LISTED ON