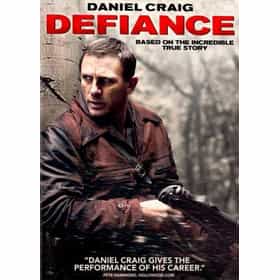 Defiance is a 2008 WWII era film written, produced, and directed by Edward Zwick, and set during the occupation of Belarus by Nazi Germany. The film is an account of the Bielski partisans, a group led by Polish Jewish brothers who saved and recruited Jews in Belarus during the Second World War. The film stars Daniel Craig as Tuvia Bielski, Liev Schreiber as Zus Bielski, Jamie Bell as Asael Bielski, and George MacKay as Aron Bielski. The film is an adaptation of Nechama Tec's book Defiance: The Bielski Partisans. ... more on Wikipedia

Defiance is ranked on...

Defiance is also found on...