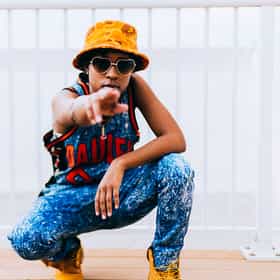 Deja Trimble (born April 8, 1991), better known by her stage name Dej Loaf (stylized as DeJ Loaf), is an American rapper, singer and songwriter from Detroit, Michigan. She began her music career in 2011, and released her debut single Just Do It in 2012. In October 2014, she released her second mixtape, Sell Sole. DeJ Loaf rose to greater success in 2014 with her single "Try Me", which initially attained viral internet popularity and peaked at number 45 on the US Billboard Hot 100. The song was certified Gold on April 3, 2015 in the US. Later that year, she was chosen as part of the XXL magazine 2015 Freshman Class. ... more on Wikipedia

Dej Loaf is ranked on...

#50 of 60 The Best New Female Artists 252.9k VOTES Rising female stars represent a diverse range of voices in the current music industry. From country to rap to pop, new femal...
#51 of 144 The Best Young Rappers and New School Rappers 757.6k VOTES Hip hop heads, it's time to vote for who you believe will be future hip hop legends. From the best new rappers to the y...
#356 of 507 The Greatest Rappers Of All Time 6.3M VOTES Finally, a definitive list of the best rappers of all time, ranked by fans all over the world. From the early '80s to pres...
#711 of 1,069 The Worst Bands of All Time 1.3M VOTES The worst bands in music history, ranked by music fans (and haters.) This list contains the most awful bands to listen to fr...
#44 of 195 The Best New School Rappers 501.2k VOTES Hip hop heads, who are the best new school rappers? Making the best and newest rap songs of 2018, these rising hiphop kings ...
#219 of 513 The Worst Rappers of All Time 568.9k VOTES Featuring SoundCloud rappers who went mainstream to YouTubers who also rap (sort of), this is the definitive list of th...
#26 of 307 The Greatest Women Rappers of All Time 417.6k VOTES Responsible for some of the hottest tracks of 2018, these women rappers and MCs know how to handle a mic. Since th...
#8 of 27 The Best Rappers Named After Foods 1.7k VOTES Here are the best rappers with foods in their names. The following hip hop artists are all famous rappers whose names have s...
#23 of 23 The Best Rapper Stage Name Origin Stories 3.6k VOTES Ever wonder why your favorite rappers are called the names that they're called? Clearly, rapper names like Waka Flocka Flame...
#104 of 132 The Best Musical Artists From Michigan 10k VOTES Here are the best artists and bands from Michigan. Some of the most famous singers and bands of all time got their start in ...
#27 of 76 The Best Midwestern Rappers 32.8k VOTES Midwest hip hop artists list, with photos, ranked best to worst by votes. List of good midwest rappers includes a filter so ...
#28 of 113 The Best Detroit Rappers 97.5k VOTES This Detroit rappers list ranks the best Detroit rappers and hip hop groups by votes. This list of good rappers from Detro...