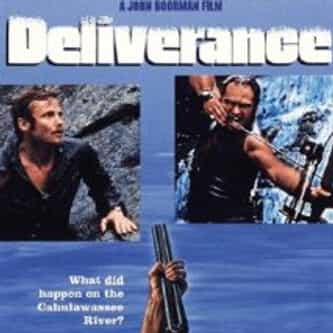 Tagline
This is the weekend they didn't play golf.

Deliverance is a 1972 American dramatic thriller film produced and directed by John Boorman, and starring Jon Voight, Burt Reynolds, Ned Beatty and Ronny Cox, with the latter two making their feature film debuts. The film is based on the 1970 novel of the same name by American author James Dickey, who has a small role in the film as the Sheriff. The screenplay was written by Dickey and an uncredited Boorman. ... more on Wikipedia

56.8k readers Behind The Scenes Of The Infamous 'Squeal Like A Pig' Scene In ‘Deliverance’

Deliverance IS LISTED ON