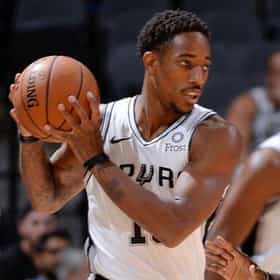 DeMar Darnell DeRozan (born August 7, 1989) is an American professional basketball player for the San Antonio Spurs of the National Basketball Association (NBA). He played college basketball for the USC Trojans and was selected ninth overall by the Toronto Raptors in the 2009 NBA draft. He is a four-time NBA All-Star and a two-time All-NBA Team member. He spent nine seasons with the Raptors, including five playoff runs, before being traded to the Spurs in the summer of 2018. DeRozan has played for the United States national team in the 2014 World Cup and the 2016 Summer Olympics. ... more on Wikipedia

DeMar DeRozan is ranked on...

DeMar DeRozan is also found on...