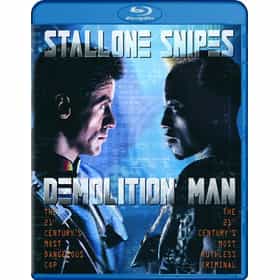 Demolition Man is a 1993 American science fiction action film directed by Marco Brambilla in his directorial debut. The film stars Sylvester Stallone and Wesley Snipes. The film was released in the United States on October 8, 1993. The film tells the story of two men: an evil lord and a risk-taking police officer. Cryogenically frozen in 1996, they are restored to life in the year 2032 to find mainstream society changed and all acts seemingly eliminated. Some aspects of the film allude to Aldous Huxley's dystopian novel, Brave New World. ... more on Wikipedia

Demolition Man Remains One Of The Most Underrated Movies Of The '90s 193.6k views When was the last time you watched Demolition Man? It might look like another futuristic shoot-em-up movie starring Sylveste...

Demolition Man is ranked on...

Demolition Man is also found on...