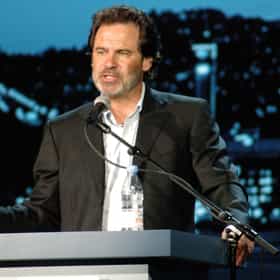 Dennis Michael Miller (born November 3, 1953) is an American talk show host, political commentator, sports commentator, actor, and comedian. He was a cast member of Saturday Night Live from 1985 to 1991, and subsequently hosted a string of his own talk shows on HBO, CNBC, and in syndication. From 2007 to 2015, Miller hosted a daily, three-hour, self-titled talk radio program, nationally syndicated by Westwood One. He is known for his critical assessments of current events, laced with pop culture references and delivered in an idiosyncratic verbal style. Miller is listed as 21st on Comedy Central's 100 greatest stand-up comedians of all time, and was ranked as the best host of SNL's ... more on Wikipedia

Dennis Miller is ranked on...

#106 of 276 The Most Trustworthy Celebrities in the World 783.1k VOTES Trust: the belief that someone or something is reliable, good, honest, effective, etc. When it comes to celebrities, do any ...
#41 of 96 People who voted for Dennis Miller... People in the Central US are 2x more likely to vote for this also upvote Twilight Saga Franchise on The Worst Movies Of All Time The Best SNL Cast Members of All Time 375.2k VOTES A list of the best Saturday Night Live cast members from the show's 40 seasons. The sketch comedy show has long been a favor...
#86 of 408 People who voted for Dennis Miller... also upvote Vacation Franchise on The Most Rewatchable Movies also upvote Jimmy Carter on The Worst U.S. Presidents The Funniest Stand Up Comedians Of All Time 1M VOTES A ranked list of the best stand up comedians in the history of the art form. First and foremost, all of the people on this l...
#267 of 531 Annoying Celebrities Who Should Just Go Away Already 1.2M VOTES The most annoying celebrities, ranked by entertainment fans themselves. These annoying celebs are obnoxious, overexposed, ...
#243 of 514 People who voted for Dennis Miller... People under 30 are 2x more likely to vote for this Celebrities Nobody Cares About Anymore 3.4M VOTES Some of the greatest actors of all time have, in recent days, turned into a bunch of washed-up hacks that would be somehow b...
#9 of 16 Every Host in SNL Weekend Update History, Ranked 14.9k VOTES "Saturday Night Live" has been around since 1975, and one of the show's trademark segments is the wonderful Weeken...
#46 of 70 The Most Successful Saturday Night Live Alumni 51.1k VOTES This list of the most successful Saturday Night Live alumni in the show’s history, has been ranked by SNL fans. In the 40+ s...
#9 of 48 The Best SNL Cast Members of the '80s 4.9k VOTES Ah, the legendary '80s of Saturday Night Live. Lorne Michaels left in 1980 and took a chunk of the cast and writers with h...
#22 of 46 The Best SNL Cast Members of the '90s 5.9k VOTES The '90s for Saturday Night Live was just as tumultuous as the '80s had be as NBC executives continued to mess with the sh...
#21 of 57 The Best Male Talk Show Hosts in TV History 1.5k VOTES Most of the best male talk show hosts are on late night talk shows. From Conan O'Brien and David Letterman to James Corden a...
#51 of 54 The Best Emmy Hosts Ever 9k VOTES Hosting the Emmy awards is a tough gig. Just showing up for the Primetime Emmys requires wit and reflexes so Emmy hosts who ...
#21 of 50 People who voted for Dennis Miller... People in the South are 2x more likely to vote for this The All-Time Greatest Late Night Talk Show Hosts 82.3k VOTES The all-time greatest late night talk show hosts have entertained us for years as we drift off to sleep. These hosts are cha...
#14 of 18 Creepy Celebrity Dolls That Will Give You Nightmares 2.4k VOTES Most dolls are creepy to begin with. Once you involve celebrities in the doll game, it goes from creepy to downright scary. ...
#40 of 53 Who Should Replace Jon Stewart as Host of The Daily Show? 6.9k VOTES UPDATE: On March 30, 2015, Comedy Central announced that Trevor Noah, The Daily Show correspondent since December 2014 will ...
#7 of 11 Stand-Up Comedians That People Love To Hate 4.4k VOTES Anyone who's ever tried to go up on stage knows that stand-up comedians don't have an easy job. You have to be witty, charmi...
#6 of 25 The Funniest Conservative Comedians of All Time 10.5k VOTES This list contains information about the best conservative comedians, loosely ranked by user votes. The best conservative ...
Here's a List of Every Known Republican Celebrity 1.8M VIEWS Conservative celebrities - this list of Republican celebrities has over 400 celebrities who are Republicans. What celebritie...
The Smartest Celebrities 805.1k VIEWS The smartest celebrities are those who have documented high IQs, multiple degrees from distinguished universities, and a h...
Famous People Whose Last Name Is Miller 15.2k VIEWS Being a fairly common name, it's no surprise there are a lot of famous people with the last name Miller. Do you recognize al...
90s SNL Favorites: Where Are They Now? 33.8k VIEWS Back in the old timey days of the '90s, Saturday Night Live was a hotbed for funny people. Yes, tweens, people were alive ...
#18 of 31 The Funniest Deadpan Comedians of All Time 2k VOTES This list contains information about the best deadpan comedians, loosely ranked by user votes. The best deadpan comedians ...
Famous People Named Dennis 14.9k VIEWS If your name is Dennis, then you're in some great company. Here's our list of the most famous people named Dennis or Denny, ...
American Stand-Up Comedians: The Best Comics In the USA 169k VIEWS American comedians are some of the top rated stand up comedians in the world. These are the greatest stand up comedians this...
Celebs with Political Stances That You Hate 124.3k VIEWS The realm of entertainment gossip may seem like a safe haven from current events, but celebrity politics seem to pop up ther...
25+ Comedians Who Were on Star Search 44.3k VIEWS Long before there was American Idol, The X Factor, or America's Got Talent, there was Star Search, hosted by Ed McMahon. Som...
20 Celebrities Who Have Had Hair Transplants 844k VIEWS Here's a look at some famous men who started to go bald but were able to prevent it with a little help. These handsome celeb...
#46 of 82 Former Cast Members We Want To See Host SNL 383 VOTES When Adam Sandler returned to the halls of Studio 8H in 2019 to host Saturday Night Live, many were surprised that the famed...
‘90s List Of Playboy Interviews 10.4k VIEWS Here is a list of all Playboy interview subjects during the new media age of the '90s. A major part of the magazine appears ...
Celebrities Who Endorsed 2012 GOP Candidates 44.4k VIEWS Celebrities who endorsed 2012 Republican presidential candidates include some well-known celebs who have, over the years, co...

Dennis Miller is also found on...