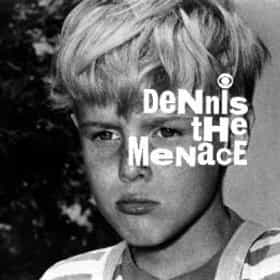 Dennis the Menace is an American sitcom based on the Hank Ketcham comic strip of the same name and preceded The Ed Sullivan Show on Sunday evenings on CBS from October 1959 to July 1963. The series stars Jay North as Dennis Mitchell; Herbert Anderson as his father, Henry; Gloria Henry as his mother, Alice; Joseph Kearns as George Wilson, Gale Gordon as George's brother, John Wilson, Sylvia Field as George's wife, Martha Wilson, and Sara Seegar as John's wife, Eloise Wilson. Originally sponsored by Kellogg's cereals and Best Foods, the series was produced by Dariell Productions and Screen Gems. ... more on Wikipedia

Dennis the Menace is ranked on...

#181 of 296 The Greatest Sitcoms in Television History 945.6k VOTES Best sitcoms ever to air on television includes some of the greatest sitcoms of all time as ranked by fans of TV. What's the...
#195 of 483 People who voted for Dennis the Menace... also upvote Back to the Future Franchise on The Best Movies of All Time also upvote Home Alone Franchise on The Best Movies of All Time The Funniest TV Shows of All Time 532.7k VOTES   The funniest TV shows ever range from some of the best TV shows of recent memory to some of the best TV shows of al...
#47 of 56 The Best Live-Action Comic Book Shows of All Time 8.1k VOTES Superheroes are currently sweeping the box office and, slowly but surely, taking a strong hold on our TV screens as well. It...
#1 of 8 The Best Movies and Series in the Dennis the Menace Franchise 17 VOTES The first Dennis the Menace movie came out in 1987 and it wasn’t until 1993 that a Dennis the Menace movie made it to theate...
#114 of 245 The Very Best Shows That Aired in the 1960s 94.3k VOTES List of the best television programs from the 1960s, as ranked by television fans. It was in the 60s that television first b...
#35 of 64 The Greatest Sitcoms from the 1960s 27.1k VOTES When you’re in the mood for a good laugh, there’s no better medium than the televised situational comedy. Sitcoms are design...
#10 of 27 The Best 1960s CBS Comedy Shows 2.6k VOTES These are the best 1960s CBS comedy shows ranked from best to worst by user votes. From good 1960s CBS comedy TV series that...

Dennis the Menace is also found on...