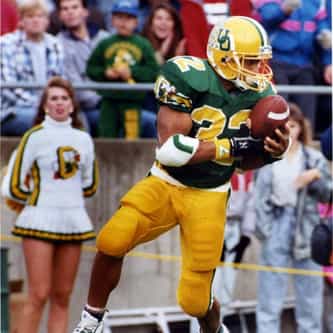 Derek Kevin Loville (born July 4, 1968) is a former American football running back who played nine years in the NFL for the Seattle Seahawks, San Francisco 49ers and Denver Broncos from 1990 to 1999. He played for Archbishop Riordan High School. Never drafted by an NFL team, Loville played collegiately at the University of Oregon and was able to find a spot on the Seahawks' roster for the first two years of his career from 1990 to 1991. Used sparingly as a back-up during his NFL playing ... more on Wikipedia

Derek Loville IS LISTED ON