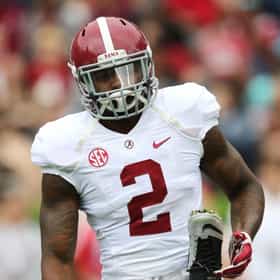 Derrick Lamar Henry Jr. (born January 4, 1994) is an American football running back for the Tennessee Titans of the National Football League (NFL). He played college football for the Alabama Crimson Tide, and was drafted in the second round of the 2016 NFL draft by the Titans. In December 2015, he broke Herschel Walker's single-season college rushing yards record in the SEC. He won the 2015 Heisman Trophy, as well as the Doak Walker Award, the Maxwell Award, and the Walter Camp Award. Henry holds the national high school football record for career rushing yards. ... more on Wikipedia

Derrick Henry is ranked on...

Derrick Henry is also found on...