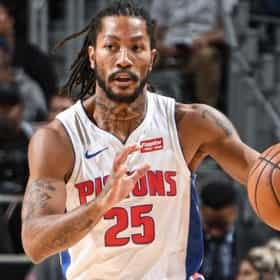 Derrick Martell Rose (born October 4, 1988) is an American professional basketball player for the Detroit Pistons of the National Basketball Association (NBA). He played one year of college basketball for the Memphis Tigers before being drafted first overall by his hometown Chicago Bulls in the 2008 NBA draft. After being named the NBA Rookie of the Year, Rose, at age 22, became the youngest player to win the NBA Most Valuable Player Award in 2011. Rose was born and raised in Chicago, and attended Simeon Career Academy. He was highly recruited by colleges, eventually choosing to join the University of Memphis under coach John Calipari. Rose led the Tigers to the most wins in NCAA ... more on Wikipedia

Derrick Rose is ranked on...

Derrick Rose is also found on...