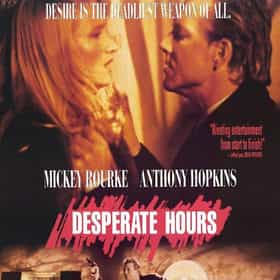 Desperate Hours is a 1990 remake of the 1955 William Wyler crime drama of the same title. Both films are based on the novel by Joseph Hayes, who also co-wrote the script for this movie with Lawrence Konner and Mark Rosenthal. Desperate Hours stars Mickey Rourke, Anthony Hopkins, Mimi Rogers, Kelly Lynch, Lindsay Crouse, Elias Koteas and David Morse. It is directed by Michael Cimino, who had previously worked with Rourke on the films Heaven's Gate and Year of the Dragon. ... more on Wikipedia

Desperate Hours is ranked on...

Desperate Hours is also found on...