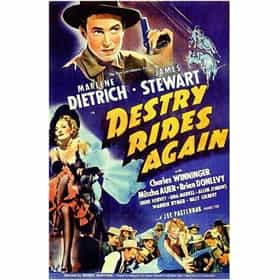 Destry Rides Again is ranked on...

#119 of 396 The Best Western Movies Ever Made 360.3k VOTES The best Western movies ever made include some true classics from the early days of cinema, and more modern day films that c...
#9 of 244 The Best Movies of 1939 5k VOTES List of the best movies of 1939, with movie trailers when available. These top movies of 1939 are listed by popularity, so t...
#146 of 214 The Best Universal Studios Movies List 11.4k VOTES List of Universal Studios movies, ranked best to worst, including trailers, genres, and release dates. Universal Studios pro...
#41 of 50 The Best '30s Comedy Movies 2.1k VOTES The Golden Age of Hollywood was also a golden age of comedy. Comedy titans like the Marx Brothers and Charlie Chaplin releas...
#23 of 85 People who voted for Destry Rides Again... are 12x more likely to vote for The Man Who Shot Liberty Valance on this list are 7x more likely to vote for Winchester '73 on this list Every James Stewart Movie, Ranked Best to Worst 15.1k VOTES The best James Stewart movies of all time prove that he was one of the top actors of his generation. Active from the 1930s u...
#8 of 46 The Best Jack Carson Movies 346 VOTES List of the best Jack Carson movies, ranked best to worst with movie trailers when available. Jack Carson's highest grossing...
Filmsite's Great Films With No Academy Award Nominations 4.1k VIEWS Filmsite says: "Although the Academy of Motion Picture Arts and Sciences® has awarded many deserving honors to its ...