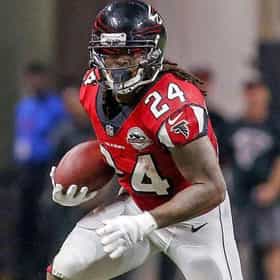 Devonta Freeman (born March 15, 1992) is an American football running back for the Atlanta Falcons of the National Football League (NFL). He was drafted by the Falcons in the fourth round of the 2014 NFL Draft. He attended and played college football for Florida State from 2011–2013. Freeman attended Miami Central High School in West Little River, Florida. He helped lead the Rockets football team to the 2010 Class 6A state championship and was named the MVP after gaining 308 yards on 36 carries, falling just 20 yards shy of a state championship game record. As a senior, he ran for a Miami-Dade County leading 2,208 yards and 26 touchdowns, and also recorded 663 rushing yards and six ... more on Wikipedia

Devonta Freeman is ranked on...