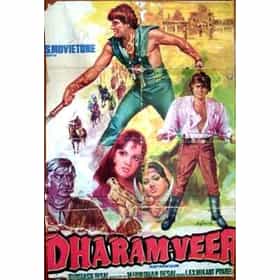 Dharam-Veer is a 1977 Indian Hindi film, produced and directed by Manmohan Desai. The movie stars Dharmendra, Zeenat Aman, Jeetendra, Neetu Singh, Pran, Indrani Mukherjee, Jeevan and Ranjeet. Dharmendra's young son Bobby Deol appears briefly playing the younger version of his father's character. It was part of Desai's four big hits of the year based on the "separated and reunited" theme. Dharam-Veer takes place in a mythical kingdom and tells the tale of twin brothers separated at birth who still become best friends when they are older, not knowing that they were real brothers. It also tells about their adventures, Dharam winning the love of a beautiful princess, court ... more on Wikipedia

Dharam Veer is ranked on...

Dharam Veer is also found on...