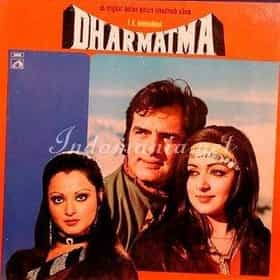 Dharmatama is a 1975 Hindi movie and the first Bollywood film to be shot in Afghanistan. It was produced and directed by Feroz Khan. The movie is the first attempt in India to localise The Godfather. The title character was based on matka king Ratan Khatri. It is said that Khan sat down with Khatri to learn more about him and understand the nuances of matka. The cast includes Feroz Khan, Hema Malini, Rekha, Premnath, Imtiaz Khan, Danny Denzongpa, Farida Jalal, Ranjeet, Helen, Madan Puri, Jeevan, Iftekhar and Dara Singh. The music is by Kalyanji Anandji. This film took Feroz Khan to new heights in his career as this was a blockbuster movie. The same year, Sholay and Deewar were ... more on Wikipedia

Dharmatma is ranked on...

Dharmatma is also found on...

Famous Movies From Afghanistan List of All Movies Released in 1975