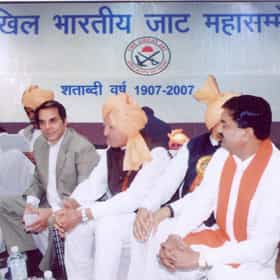 Dharam Singh Deol (Born 8 December 1935) is an Indian film actor, producer, and politician. In 1997, he received the Filmfare Lifetime Achievement Award for his contribution to Hindi cinema. One of his movies Sholay (1975). is credited to be the most successful and popular movies to ever come out of Bollywood. He was a member of the 14th Lok Sabha of India, representing Bikaner constituency in Rajasthan from Bharatiya Janata Party (BJP). In 2012, he was awarded India's third-highest civilian honour Padma Bhushan by the Government of India. ... more on Wikipedia

Dharmendra is ranked on...

Dharmendra is also found on...