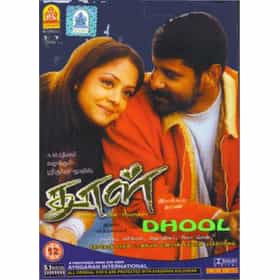 Dhool is a 2003 Tamil action film directed by Dharani. The film featured Vikram, Jyothika and Reemma Sen in the lead roles, while Vivek, Sayaji Shinde, Telangana Sakunthala and Pasupathy among others play supporting roles. The film, produced by A. M. Rathnam at a cost of 7 crore, had music composed by Vidyasagar and released in January 2003 to positive reviews and was a huge commercial success. It was dubbed into Malayalam with same title. The film is still considered as a cult masala entertainer. It was remade in Sinhala as Ranja. ... more on Wikipedia

Dhool is ranked on...

Dhool is also found on...