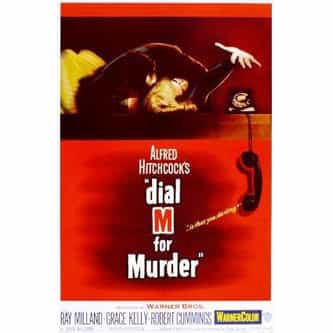 Tagline
If a woman answers...hang on for dear life!
It Holds You Spellbound with Suspense!
Murder calling in 3D! (1978 re-release)
Is this the man she was waiting for... or the man who was waiting for her?

This film is a 1954 3-D American thriller film in Warnercolor directed by Alfred Hitchcock, starring Ray Milland, Grace Kelly, and Robert Cummings. The screenplay and the successful stage play on which it was based were both written by English playwright Frederick Knott, whose work often focused on women who innocently become the potential victims of sinister plots. The play premiered in 1952 on BBC television, before being performed on stage in the same year in London's West End in June, ... more on Wikipedia

Dial M for Murder IS LISTED ON