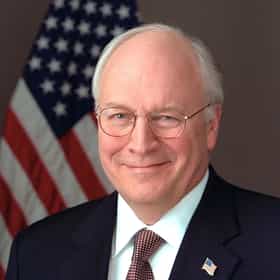 Richard Bruce Cheney (; born January 30, 1941) is an American politician and businessman who served as the 46th vice president of the United States from 2001 to 2009. He has been cited as the most powerful vice president in American history. He was also one of the most unpopular politicians in the history of the US, holding an approval rating of just 13% at the time of leaving office.Cheney was born in Lincoln, Nebraska, and grew up in Casper, Wyoming. He attended Yale and then the University of Wyoming, at the latter of which he earned a BA and an MA in Political Science. He began his political career as an intern for Congressman William A. Steiger, eventually working his way into the ... more on Wikipedia

Dick Cheney is ranked on...

Dick Cheney is also found on...