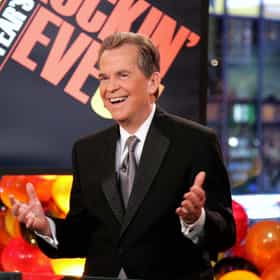 Richard Augustus Wagstaff "Dick" Clark, Jr. was an American radio and television personality, as well as a cultural icon who remains best known for hosting American Bandstand from 1957 to 1987. He also hosted the game show Pyramid and Dick Clark's New Year's Rockin' Eve, which transmitted Times Square's New Year's Eve celebrations. Clark was also well known for his trademark sign-off, "For now, Dick Clark — so long!", accompanied with a military salute. As host of American Bandstand, Clark introduced rock & roll to many Americans. The show gave many new music artists their first exposure to national audiences, including Ike and Tina Turner, Smokey Robinson and ... more on Wikipedia

Dick Clark is ranked on...

#227 of 925 People who voted for Dick Clark... Women are 2x more likely to vote for this People We Wish Were Still Alive 3.3M VOTES RIP to our world's greatest achievers, those who changed the way we live and the ways we thought. This list of people we wis...
#7 of 52 The Game Show Hosts With The Most 6.3k VOTES If you're a fan of quiz shows like Jeopardy, then you probably already know how important a great game show hosts are to the...
Famous People Whose Last Name Is Clark 8.2k VIEWS Being a fairly common name, it's no surprise there are a lot of famous people with the last name Clark. Do you recognize all...
Celebrities Who Live in Malibu 540.5k VIEWS Celebrities who live in Malibu are a lucky bunch. Of all the famous people in California, those who have homes in Malibu get...
55+ Famous People with Diabetes 113.7k VIEWS List of Famous People with Diabetes, loosely ranked by fame and popularity. Diabetes is a term for metabolic diseases that r...
Famous INFPs 632.5k VIEWS Many of the most popular musicians, authors, and artists are INFPs (Introverted Intuitive Feeling Perceiving). INFPs ar...
22 Famous People with Type 2 Diabetes 62.2k VIEWS Unlike folks with Type 1 Diabetes, people with Type 2 Diabetes can still produce insulin. However, their bodies are resistan...

Dick Clark is also found on...