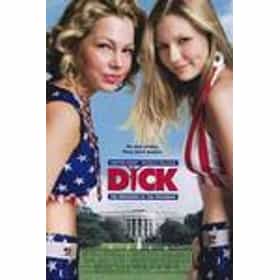 Dick is a 1999 American comedy film directed by Andrew Fleming from a script he wrote with Sheryl Longin. It is a parody retelling the events of the Watergate scandal which ended the presidency of Richard Nixon and features several cast members from Saturday Night Live and The Kids in the Hall. Kirsten Dunst and Michelle Williams star as Betsy and Arlene, two warm-hearted but not overly intelligent 15-year-old girls who are best friends, and who, through various twists and turns, become the legendary figure partly responsible for bringing down the presidency of Richard Nixon. Dan Hedaya plays Nixon. ... more on Wikipedia

Dick is ranked on...

Dick is also found on...