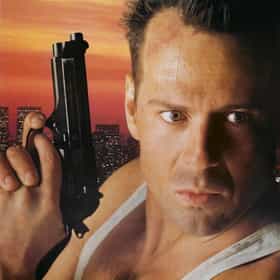 Die Hard is a 1988 American action film directed by John McTiernan and written by Steven E. de Souza and Jeb Stuart. It is based on the 1979 novel Nothing Lasts Forever, by Roderick Thorp. Die Hard follows off-duty New York City Police Department officer John McClane as he takes on a group of highly organized wrongdoers led by Hans Gruber, who perform a caper in a Los Angeles skyscraper under the guise of a terrorist attack using hostages, including McClane's wife Holly, to keep the police at bay. ... more on Wikipedia

Who Would Star In 'Die Hard' If It Were Cast Today? 472 votes Whether or not you believe Die Hard is a Christmas movie, there's a good chance that you've seen the '80s action flick and p...
17 Crazy Behind the Scenes Facts About Die Hard 24.7k views Die Hard is one of the most wildly popular films of the 20th century. Everyone loves this movie about a guy with no shoes wh...
Behind The Scenes Of Alan Rickman's Defining Role: Hans Gruber 4.7k views Oft imitated, never replicated: Hans Gruber of Die Hard is the consummate action movie antagonist. Many might say he is one ...
'Die Hard' Ripoffs, Ranked By How Hard They Die 12.2k votes One man. One hostile setting. No way out except by fighting. Die Hard didn't invent that scenario, but it codified it in t...

Die Hard is ranked on...

Die Hard is also found on...