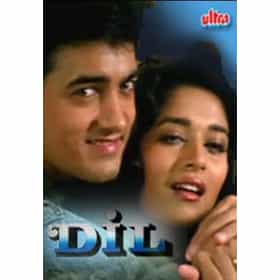 Dil is a 1990 Indian Hindi romantic drama film starring Aamir Khan, Madhuri Dixit, Anupam Kher and Saeed Jaffrey. It was directed by Indra Kumar with music composed by Anand-Milind. Dil clashed with Sunny Deol's Ghayal at the box office when released and subsequently went on to become a super-hit. The film was remade in Telugu in 1993 under the title Tholi Muddhu, starring Divya Bharti and Prashanth in the leading roles. The film was 1990's highest-grossing film, establishing the career of Kumar as a director, reaffirming the position of Khan as a lead actor and turning Dixit into a superstar who also received the Filmfare Award for Best Actress for her performance. ... more on Wikipedia

Romance Movies and Films List of All Movies Released in 1990