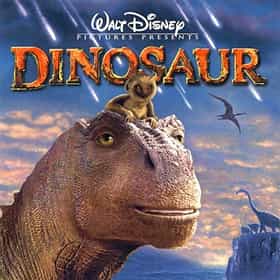 Dinosaur is a 2000 American live-action/computer-animated science fiction adventure film produced by Walt Disney Feature Animation with The Secret Lab, and released by Walt Disney Pictures. It is the 39th animated feature in the Walt Disney Animated Classics series, though it is not officially labeled as one of the animated classics in the United Kingdom. Originally a stand-alone film, it was not included in the canon until 2008. At officially $127.5 million, it was the most expensive theatrical film release of the year. The film was a financial success, grossing over $349 million worldwide in total box office revenue, becoming the fifth highest-grossing film of 2000. The film received ... more on Wikipedia

The Greatest Dinosaur Characters of All Time 4.1k votes For this poll we've created a list of the greatest dinosaurs of all time, featuring dinosaurs you know from children's dinos...

Dinosaur is ranked on...

Dinosaur is also found on...