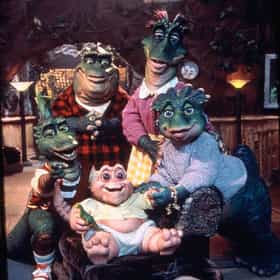 Dinosaurs is an American family sitcom that was originally broadcast on ABC from April 26, 1991 to July 20, 1994. The show, about a family of anthropomorphic dinosaurs, was produced by Michael Jacobs Productions and Jim Henson Productions in association with Walt Disney Television and distributed by Buena Vista International, Inc. The show used voice actors for the characters, which were performed by different puppeteers. ... more on Wikipedia

21 Behind The Scenes Facts From Dinosaurs 441.9k views Remember that TV show Dinosaurs with the awesomely adorable baby who always said "not the mama" and hit his dad wi...
You May Have Forgotten, But The ‘Dinosaurs’ Sitcom Called Out Flat-Earthers Back In 1992 7.3k views ABC's Dinosaurs was a fun and innovative take on the '90s sitcom genre. Like much of Jim Henson's work, it's also a satirica...

Dinosaurs is ranked on...

#1 of 12 Shockingly Dark Finales Of Kids' Shows 56.3k VOTES TV shows aimed at younger audiences have a responsibility to keep things light and playful. No one wants their children expo...
#1 of 17 17 Beloved '90s Shows That Ended In Really Weird Ways 6k VOTES There's a lot of classic '90s TV that's bad, a lot that's brilliant, and a lot that managed to be both. Whether it was due t...
#58 of 114 The Best Shows About Families 14.2k VOTES The best shows about families are those sitcoms and family shows that give us a break from our own families and give us a pe...
#1 of 13 The 13 Strangest Kids' Shows From The '90s All Had Puppets 2.2k VOTES The '90s brought some great cultural content, but it also brought some seriously strange pieces of media. While there w...
#20 of 45 The Most Crude and Classic '90s Adult Cartoons 24.2k VOTES Do you like crude jokes and quirky characters? Who doesn't?! This list of the best 90s adult cartoons contains all your favo...
#62 of 128 Canceled Shows We'd Most Like to See as Movies 205.2k VOTES This list of canceled shows we'd like to see as movies includes a lot of huge cult favorites. Obviously this list isn't comp...
#3 of 26 People who voted for Dinosaurs... also upvote Twilight Saga Franchise on The Most Overrated Movies of All Time The TGIF Shows You Wish Still Existed 59.2k VOTES The original TGIF programming block on ABC was a staple of the 1990s and introduced viewers to some of the best sitcoms of a...
#39 of 686 The Greatest Shows of the 1990s, Ranked 262.9k VOTES In the 1990s, television was one of the fastest growing mediums. More TV shows were popping up than ever before, and ratings...
#7 of 242 The Best 1990s ABC Shows 13.9k VOTES Go back to the days of acid wash jeans with this list of '90s ABC shows, ranked from best to worst by nostalgic TV viewers. ...
#5 of 31 The Best 1990s Fantasy TV Series 7.4k VOTES These are the best 1990s fantasy TV series, ranked from best to worst by user votes. Some of the very best 1990s fantasy TV ...
#13 of 25 The Best 1990s ABC Comedy Shows 1k VOTES Family friendly TV doesn't get any better than the best 1990s ABC comedy shows, ranked from best to worst by user votes. Whi...
#1 of 32 The Greatest TV Shows About Dinosaurs 381 VOTES Although we'd probably feel differently if we had to share the planet with them, no one's really ever hated a dinosaur. From...
#19 of 36 The Greatest TV Shows About Parenting 1k VOTES Which TV shows about parenting do you think are best? While there are countless manuals, books, and detailed guides people c...

Dinosaurs is also found on...