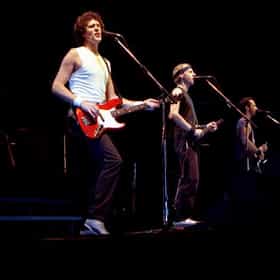 Dire Straits were a British rock band formed in London in 1977 by Mark Knopfler (lead vocals and lead guitar), David Knopfler (rhythm guitar and backing vocals), John Illsley (bass guitar and backing vocals), and Pick Withers (drums and percussion). They were active from 1977 to 1988 and again from 1991 to 1995. The band became one of the world's best-selling music artists, with album sales of over 100 million.Their first hit single "Sultans of Swing", from their self-titled debut album released in 1978, reached the top ten in the US chart and became a top ten hit in the UK the following year. The band released several hit singles in the 1980s, such as "Romeo and ... more on Wikipedia

Dire Straits is ranked on...

#16 of 283 Musicians Who Belong in the Rock and Roll Hall of Fame 415.9k VOTES Update: the Rock and Roll Hall of Fame has listened to your feedback and inducted a number of artists on this list sinc...
#29 of 2,186 The Greatest Musical Artists of All Time 13.4M VOTES When VH1 polled fellow artists to name the greatest artists of all time, it seemed like a good idea---but in reality, the li...
#22 of 353 People who voted for Dire Straits... Men are 2x more likely to vote for this The Greatest Classic Rock Bands 475.8k VOTES The greatest classic rock bands of all time embody the spirit of a generation of people who just wanted to rock. These top c...
#35 of 2,219 The Best Rock Bands of All Time 3.2M VOTES There are thousands of rock bands that have existed throughout the decades ever since the dawn of rock and roll, but only th...
#31 of 505 The Greatest Musical Artists of the '80s 550.8k VOTES   The greatest and most prolific artists of music's most colorful decade are remembered on this list. This list is ba...
#36 of 222 Bands/Artists With Only One Great Album 50.4k VOTES Bands or artists who produced one great album and never came close to matching it. Vote down if you either don't agree that ...
#320 of 410 The Greatest Musical Artists of the '90s 1M VOTES   Take a big whiff- "mmmbop", it smells like the '90s in here! An incredibly eclectic decade for music, the...
#39 of 626 The Greatest Live Bands of All Time 328.2k VOTES List of the greatest live bands or artists of all time, created and ranked by music fans worldwide asks the question "w...
#12 of 383 The Best Pop Artists of the 1980s 370k VOTES The 1980s was a huge decade in terms of breaking pop stars. 80s artists benefited from the rising popularity of cable televi...
#13 of 101 The Best Musical Groups Featuring Brothers, Ranked 1.4k VOTES Here are the greatest bands and groups featuring brothers. The family that plays together stays together. A lot of bands hav...
#6 of 107 Which Bands Or Musicians Do You Most Want To See Before They (Or You) Kick The Bucket? 35.7k VOTES There's a certain energy associated with a live performance that just can't be replicated or synthesized by a single album. ...
#5 of 11 The Nastiest Fights In Rock & Roll Hall Of Fame History 27.1k VOTES It seems as though the Rock & Roll Hall of Fame in Cleveland has hosted as many marquee fights as Madison Square Garden....
#43 of 72 Musicians You Most Wish Would Put Out A Christmas Album 3.5k VOTES It's the most wonderful time of the year: Christmas. Nothing beats sipping hot cocoa next to the fire, jamming out to your f...
#16 of 322 The Best Pop Rock Bands & Artists 1G VOTES Over the years, pop rock has come to dominate the radio waves. Mixing a catchy pop sound with light (read: not serious) lyri...
#21 of 411 The Best British Rock Bands/Artists 277.9k VOTES Of all the important rock bands to grace the stage, British bands are considered by many to be the most important and most i...
#6 of 112 The Best Celtic Rock Bands/Artists 10.8k VOTES Celtic rock artists list, with photos, ranked best to worst by votes. List of good celtic rock bands includes a filter so yo...
#1 of 44 The Best Roots Rock Bands/Artists 1.4k VOTES ]Roots rock artists list, with photos, ranked best to worst by votes. List of good roots rock bands includes a filter so you...

Dire Straits is also found on...