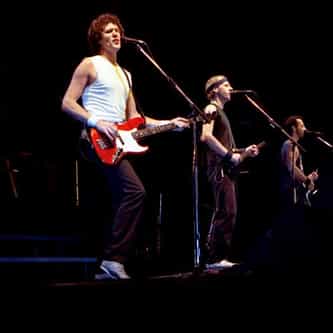 Dire Straits were a British rock band formed in London in 1977 by Mark Knopfler (lead vocals and lead guitar), David Knopfler (rhythm guitar and backing vocals), John Illsley (bass guitar and backing vocals), and Pick Withers (drums and percussion). They were active from 1977 to 1988 and again from 1991 to 1995. The band became one of the world's best-selling music artists, with album sales of over 100 million.Their first hit single "Sultans of Swing", from their self-titled ... more on Wikipedia

1.7k votes The Best Dire Straits Albums of All Time

1.4k votes The Best Mark Knopfler Albums of All Time

Dire Straits IS LISTED ON