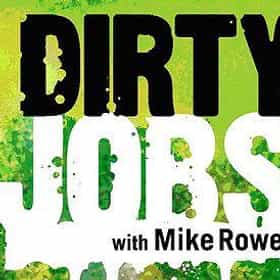 Dirty Jobs was a TV series on the Discovery Channel in which host Mike Rowe is shown performing difficult, strange, disgusting, or messy occupational duties alongside the typical employees. The show, produced by Pilgrim Films & Television, premiered with three pilot episodes in November 2003. It returned as a series on July 26, 2005, running for eight seasons until September 12, 2012. The show's setting was refocused in Australia for the eighth season, advertised as Dirty Jobs Down Under. There is also a European edition of the show hosted by former Manchester United and Denmark goalkeeper Peter Schmeichel. On November 21, 2012, Rowe announced that Discovery Channel had cancelled ... more on Wikipedia

Dirty Jobs is ranked on...

#307 of 2,297 The Greatest TV Shows Of All Time 1.5M VOTES Choosing the best TV shows of all time means taking into account the best TV dramas, the best TV comedies, the best cartoons...
#19 of 255 People who voted for Dirty Jobs... also upvote Young Frankenstein on The Absolute Most Hilarious Movies Ever Made also upvote Barack Obama on Lying Politicians: The Worst Liars In American Politics The Best Reality TV Shows Ever 170.4k VOTES This is a list of the best reality TV shows on television, the most (often shamefully) addictive reality TV series. From g...
#1 of 41 The Best Reality Dramas 6.6k VOTES The best reality dramas include programs that keep viewers interested with compelling stories and fascinating characters. Ye...
#24 of 27 The Worst Shows Your Boyfriend Makes You Watch 1.5k VOTES With a zillion channels, there's a plethora of TV show choices for everybody. However, some of your boyfriend's faves drive ...
#3 of 30 What to Watch If You Love 'Pawn Stars' 71 VOTES Pawn Stars is a retail-driven reality series that garnered the love and affection of hordes of fans, but if you’ve fini...
#13 of 29 What to Watch If You Love 'American Pickers' 36 VOTES American Pickers is a reality show about finding valuable antiques all over the United States that garnered the love and aff...
#14 of 51 The Best Educational Television Shows 4.7k VOTES The very best educational television shows on television, ranked from best to worst. This list of the greatest educational t...
#4 of 39 The Most Exciting Reality Shows Ever Made 401 VOTES The best reality TV shows ever aired are some of the most exciting series to watch on television, but which are the most exc...