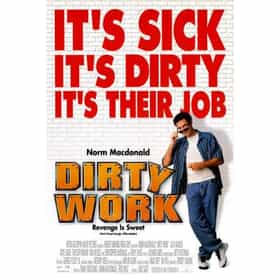 Dirty Work is a comedy buddy film starring Norm Macdonald, Artie Lange, Jack Warden, and Traylor Howard and directed by Bob Saget. In the film, long-time friends Mitch and Sam start a revenge-for-hire business, and work to fund heart surgery for Sam's father Pops. When they take on work for an unscrupulous businessman, in order to be paid, they create a revenge scheme of their own. Adam Sandler makes a cameo appearance as Satan. The film was the first starring vehicle for Macdonald and Lange and the first feature film directed by Saget, coming one year after he left his long-running role as host of America's Funniest Home Videos. Though the film received broadly negative reviews from ... more on Wikipedia

Dirty Work is ranked on...

Dirty Work is also found on...