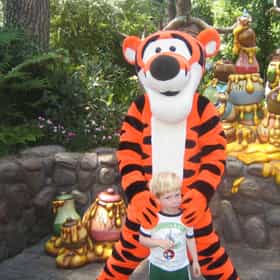 Disneyland Park, originally Disneyland, is the first of two theme parks built at the Disneyland Resort in Anaheim, California, opened on July 17, 1955. It is the only theme park designed and built under the direct supervision of Walt Disney. It was originally the only attraction on the property; its name was changed to Disneyland Park to distinguish it from the expanding complex in the 1990s. Walt Disney came up with the concept of Disneyland after visiting various amusement parks with his daughters in the 1930s and 1940s. He initially envisioned building a tourist attraction adjacent to his studios in Burbank to entertain fans who wished to visit; however, he soon realized that the ... more on Wikipedia

Abraham Lincoln
Inside Club 33, Disneyland's Most Exclusive Secret Spot 72.5k views Who's a member of the club that's made for you and me? That would be the Mickey Mouse Club, but there's another super secret...
The Coolest, Best Kept Secrets of the Disney Parks 71.6k votes Think you know all of the Disneyland secrets? The popular theme park harbors some deep, dark, and sometimes amusing secrets ...
The Best Rides at Disneyland 21.2k votes List of the best rides at Disneyland, including photos, types of rides, and more information. This ranked list of the best D...
Creepy Stories and Legends About Disneyland 761.2k views Walt Disney created a theme park like no other. It wasn't just a collection of amusements; it was a complete, self-contained...
Bygone Disneyland Rides, Ranked By Most Missed 179 votes Find yourself missing the Mickey’s Toontown Jolly Trolley? Did you get a chance to ride the Rocket Rods before they were rem...
Disney Parks Tips & Tricks To Get The Most Out Of A Visit To The Happiest Place(s) On Earth 2.5k votes Four little words encapsulate pure, unbridled joy for children of all ages: “I’m going to Disneyland!” Disney parks are true...
Reasons Why Disneyland Will Always Be Better Than Disney World 27.3k votes In the United States, there two places that Disney fans consider to be the holy land: Disney World in Orlando, FL, and Disne...
Disneyland Easter Eggs Only A Super Fan Could Spot 2k votes When walking through the streets of Disneyland, sharp-eyed visitors can spot tons of hidden Mickeys, secret treats, and obsc...
Amazing Photos Of Your Favorite Disney Rides Under Construction 1.9k votes These photos illustrate how much work really went into the happiest place on earth. Walt Disney wasn't just a visionary; he ...
Exploring All The Unofficial Theme Days At Disneyland 459 votes One of the most remarkable things about Disney is the incredible enthusiasm the company sparks in its loyal fans. There is a...
'Captain EO' Was A Bizarre Fever Dream With Michael Jackson As The Main Character 7.6k views The Michael Jackson film Captain EO played at Disneyland and Disney World in 3D and "4D" for almost two decades be...
The History Of Pepper’s Ghosts, The Special Effect Behind Disneyland’s Haunted Mansion 1k views Anyone who considers themselves a Disney Parks fan is familiar with the spectral entities that lurk in the Haunted Mansion. ...
The Coolest Easter Eggs And Details At Star Wars: Galaxy’s Edge 236 votes With the opening of Star Wars: Galaxy's Edge in Disneyland, the park's talented designers, artists, and imagineers created m...
Secrets From An Ex-Disney World Cast Member 321k views The wonderful world of Disney is filled with magic, pixie dust, and secrets. In order to keep the magical realm secure there...
20 Magical Photos From Disneyland's Opening Day 100.6k views On July 17, 1955, Disneyland opened its doors to the public for the very first time after only one year of construction. Wal...
The Best Rides at Disney's California Adventure 6.4k votes What is even better than a day at Disneyland? A Park Hopper pass that also allows you access to California Adventure! This i...
Things You Never Knew About Disney Social Clubs 296.3k views Disneyland is known for many things. There are rides like It's a Small World and Splash Mountain, the insanely delicious Dol...
The Best Rainy Day Rides At Disneyland 376 votes Figuring out which attraction to visit when you walk into Disneyland can be a daunting task, and adding rain to the mix take...
Which Disney Ride Are You According To Your Zodiac Sign 1.6k views Disneyland is the most magical place in the world thanks to its creative characters, fantastical light shows, and of course,...
The Top Disney Social Networks 603 votes Top Disney message boards and social networks on the Web, including niche social communities as well as those organized by l...
The Best Rides at Hong Kong Disneyland 1.1k votes List of the best rides at Hong Kong Disneyland, including photos, types of rides, and more information. This ranked list of ...
The Best Places To Eat At Disneyland 83 votes Be sure to bookmark this list for your next visit to the happiest place on Earth, because we’re ranking the best Disneyland ...
The Best Times to Go to Disneyland 88 votes If you're flirting with the idea of a Disney vacation, then you're probably already wondering about the best time of year fo...
The Best Places To Eat At Disney's California Adventure 51 votes Wear stretchy pants and make sure you have your wallet handy, because we’re counting down the best places to eat at Disney C...
The Most Helpful Disneyland Tips & Tricks 712 votes A trip to Disneyland can be a memorable and exciting one by following some simple tips. However, without proper planning, yo...
All the Lands at Disneyland, Ranked by Which You Most Want to Live In 1.5k votes Every kid occasionally fantasized about living in Disneyland, but what if you really could? Say you had your pick of all lan...

Disneyland is ranked on...

#6 of 77 The Best Amusement Parks In America 18.4k VOTES Here is a list of the most popular amusement parks that can be found in the US. Theme parks can be great destinations for qu...
#20 of 217 People who voted for Disneyland... also upvote Star Trek Franchise on The Greatest Sci-Fi Movies of All Time also upvote Indiana Jones Franchise on The Greatest Action Movies of All Time The Best Tourist Attractions in America 41.4k VOTES The best tourist attractions in America are the most loved and most visited places to see in the United States. Visited by m...
#15 of 34 People who voted for Disneyland... People on the West Coast are 2x more likely to vote for this The Best Theme Parks For Roller Coaster Junkies 9.6k VOTES Ready for your roller coaster road trip this summer? Here are the Ranker community's top picks for the best roller coaster t...
#8 of 25 The Best Of The Most Visited Tourist Destinations in America 439 VOTES These stellar sights are the top 25 most visited tourist destinations in America, each offering something special that attra...
#15 of 15 Inner Sanctums - and What's Inside Them 257 VOTES Dreams about finding hidden rooms are surprisingly common, right up there with flying, being naked in class, or forgett...
#5 of 65 The Top Must-See Attractions in Los Angeles 5.7k VOTES List of things to do in LA. What are the best things to do in Los Angeles? While surfing in California is a must for some, o...
#7 of 44 The Best Day Trips from Los Angeles 917 VOTES List of the best day trips from Los Angeles. L.A. is exciting, but travelers can easily start to feel crowded by the city; i...

Disneyland is also found on...