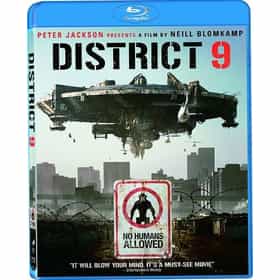 District 9 is a 2009 science fiction film directed by Neill Blomkamp, released August 13, 2009. It takes place in Johannesburg, South Africa. District 9 is based on Alive in Joburg, a short film directed by Neill Blomkamp, Sharlto Copley, Simon Hansen and Shanon Worley. The title and plot elements are influenced by the real-life District 6 in Cape Town. Copley also portrayed one of the interviewed policemen. The short film is about aliens landing in South Africa and becoming confined to a specific area and forced to work. ... more on Wikipedia

District 9 is also found on...