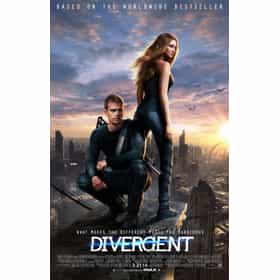 Divergent is a 2014 American science fiction action film directed by Neil Burger, based on the novel of the same name by Veronica Roth. The film is the first installment in The Divergent Series and was produced by Lucy Fisher, Pouya Shabazian, and Douglas Wick, with a screenplay by Evan Daugherty and Vanessa Taylor. It stars Shailene Woodley, Theo James, Ashley Judd, Jai Courtney, Ray Stevenson, Zoë Kravitz, Miles Teller, Tony Goldwyn, Ansel Elgort, Maggie Q and Kate Winslet. The story takes place in a dystopian post-apocalyptic version of Chicago where people are divided into distinct factions based on human virtues. Beatrice Prior is warned that she is Divergent and thus will ... more on Wikipedia

Divergent is ranked on...

#13 of 78 The Best Film Adaptations of Young Adult Novels 58.5k VOTES List of best movies based on young adult literature written by some of the best young adult writers. These films were all in...
#25 of 162 The Best Movies of 2014 66k VOTES Sure there are the Oscars, Golden Globes, and a number of other award ceremonies that hand out trophies to movies that are v...
#11 of 258 People who voted for Divergent... People in the Central US are 2x more likely to vote for this also upvote The Vampire Diaries on The Best Teen Drama TV Shows The Best Teen Romance Movies 609.5k VOTES A list of the best teen romance movies, ranked by love-obsessed fans of all ages. Throughout film history, one of the most b...
#73 of 90 The 35+ Greatest Dystopian Action Movies 20.9k VOTES Some of the best films depict a bleak future. Lucky for movie-goers, this type of dystopian despair has led to some of the b...
#66 of 160 The Best Dystopian And Near Future Movies 100.7k VOTES The best dystopian and near future movies are the films that make us a little more thankful for the Starbucks line every mor...
#27 of 55 Awesome Teen Movies You Must See Before You Turn 20 14.4k VOTES The films on this list of the best movies for teenagers have ranked by the community as the best teen movies in any genre. T...
#19 of 34 What to Watch If You Love 'Pretty Little Liars' 256 VOTES Pretty Little Liars is a teen drama/mystery series about a group of high schoolers that garnered the love and affection...
#224 of 565 The Greatest Sci-Fi Movies of All Time 557.4k VOTES What are the greatest sci-fi movies of all time? Science fiction films are among the most popular movies in cinematic h...
#73 of 107 The Best Sci-Fi Movies Of The 2010s Decade 5.7k VOTES Science fiction fans need to step forward because it's time to vote for the best sci-fi movies of the decade. The ...
#107 of 110 The Best Inspirational Movies 15.6k VOTES This is a ranked list of the best inspirational movies as voted on by men and women. This inspirational list includes sports...
#27 of 45 The Best Adventure Movies for 13 Year Olds 2.1k VOTES Adventure movies can take us to exotic locations and are always filled with action. If your tween has officially become a te...
#1 of 9 Best Theo James Movies 5k VOTES List of the best Theo James movies, ranked best to worst with movie trailers when available. Theo James's highest grossing m...
#9 of 47 Good Movies for ESL Students to Watch 1k VOTES Walk into any classroom in the United States where they are teaching English as a Second Language (ESL) and you will find te...
#14 of 41 The Best Kate Winslet Movies 6.2k VOTES This list of the best Kate Winslet movies is ranked best to worst and includes movie trailers when available. Everyone loved...
#1 of 3 The Best Movies From The 'Divergent' Franchise 32 VOTES There is no doubt that all these movies are classics or at least memorable but one of them has to be the best of the Diverge...
#1 of 13 Best Jai Courtney Movies 103 VOTES List of the best Jai Courtney movies, ranked best to worst with movie trailers when available. Jai Courtney started his acti...
#10 of 24 The Best Adventure Movies of 2014 155 VOTES List of the best 2014 adventure movies, ranked by how many upvotes they've received by other fans of the genre. With stories...
#10 of 31 The Best Movies for 13 Year Old Boys 70 VOTES It’s not easy to keep a teenage boy’s attention for two hours. However, this list of movies for 13 year old boys may just do...