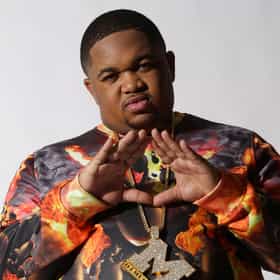 Dijon Isaiah McFarlane, professionally known as DJ Mustard, is an American record producer and DJ from Los Angeles, California. He is perhaps best known for being the official DJ of Compton-bred rapper YG, as well as for producing a string of hit singles since his entrance into mainstream music in 2011. Mustard's production style has been described as an up-tempo, club oriented, catchy yet rudimentary melodic hip hop style. This style has snowballed into the contemporary production style of West Coast hip hop during the early 2010's, which he calls "ratchet music". Almost all of his productions begin or end with the tag "Mustard on the beat, ho!", a voice sample of ... more on Wikipedia

DJ Mustard is ranked on...

#9 of 114 The Best Hip Hop Producers Right Now, Ranked 14.9k VOTES If you're wondering who made the beats for some of the biggest 2018 rap songs, check out this list of the top hip ...
#16 of 34 The Best Rappers from Compton 27.3k VOTES Compton, a small city located a few miles south of downtown LA, has a rich and vibrant history and continues to leave its ma...
#11 of 27 The Best Rappers Named After Foods 1.7k VOTES Here are the best rappers with foods in their names. The following hip hop artists are all famous rappers whose names have s...
#57 of 138 The Best West Coast Rappers 149.2k VOTES The golden age of hip hop is often associated with the East Coast - however, that doesn't mean that West Coast rappers were ...
All Of Ty Dolla Sign's Celebrity Friends 120 VIEWS Ty Dolla Sign has become one of the most prolific names in R&B and hip-hop, with celebrity friends like Kanye West, Drak...