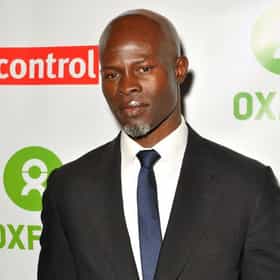 Djimon Gaston Hounsou (; French: [dʒimɔ̃ unsu]; born April 24, 1964) is a Beninese American actor and model. Hounsou began his career appearing in music videos. He made his film debut in the Sandra Bernhard film Without You I'm Nothing (1990) and gained widespread recognition for his role as Cinqué in the Steven Spielberg film Amistad (1997). He gained further recognition for his roles in Gladiator (2000), In America (2003), and Blood Diamond (2006), receiving Academy Award for Best Supporting Actor nominations for both the latter films. He also had a minor role in Furious 7 (2015). He has been nominated for a Golden Globe Award and three Screen Actors Guild Awards. Djimon ... more on Wikipedia

Djimon Hounsou is ranked on...

#234 of 258 The Best Marvel Movie Actors Ever 581.7k VOTES Ah Marvel movies. It began in 1944 with serialized films of Captain America and 70 years later, are one of the biggest, most...
#34 of 89 Celebrities Who Should Be A-Listers 122k VOTES If pop culture has room enough for multiple A-list Jennifers and Chrises, it has enough time to make some space for cer...
#33 of 56 The Greatest Non-White Actors in Hollywood 3.7k VOTES With audiences pushing Hollywood towards increased diversity both on- and off-screen, now is the perfect time to celebrate t...
#30 of 36 Best Fast And Furious Characters, Ranked 5.8k VOTES It's hard to believe The Fast and the Furious came out all the way back in 2001. The franchise is as strong as ever despite ...
#24 of 90 The Best African American Actors in Film 32.1k VOTES From any era and genre, these are the greatest African American actors in film history, ranked by the community to determine...
#10 of 16 The Sexiest Calvin Klein Ads of All Time 3.1k VOTES Calvin Klein ads are known for their sex appeal and simplicity. They are most often black and white photos featuring famous ...
Here's Where You've Heard Everyone In 'How To Train Your Dragon' Before 11.3k VIEWS Warning: This list contains spoilers for the How to Train Your Dragon trilogy. The final installment of cri...
31 Celebrities Who Learned English as a Second Language 122.6k VIEWS This list contains information about celebrities who learned English as their second language, loosely ranked by fame and po...
How to Pronounce Tricky Celebrity Names 16.3k VIEWS Not every celebrity name is as straight-forward as "Tom Hanks" and you won't find him anywhere near this list, whi...
53 Celebrities Who Have Been Homeless 671.4k VIEWS List of famous people who were homeless, loosely ranked by fame and popularity. A surprising number of famous actors, sing...
16 Celebrities Who Were Born in Africa 33k VIEWS Several famous actors, musicians, and athletes were born in Africa. Some of these famous African people relocated to the U.S...

Djimon Hounsou is also found on...