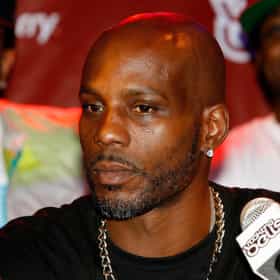 Earl Simmons (born December 18, 1970), known professionally as DMX, is an American rapper and actor. He began rapping in the early 1990s, and released his debut album, It's Dark and Hell Is Hot in 1998 to both critical acclaim and commercial success, selling 251,000 copies within its first week of release. He released his best-selling album, ... And Then There Was X, in 1999, which included the hit single "Party Up (Up in Here)". Since his debut, DMX has released seven studio albums. He has been featured in films such as Belly, Romeo Must Die, Exit Wounds, Cradle 2 the Grave and Last Hour. In 2006, he starred in the reality television series DMX: Soul of a Man, which was ... more on Wikipedia

The Best DMX Songs 1.8k votes List of the top DMX songs, as voted on by fans like you. This poll includes all DMX hits, but true fans know there are other...
The Best Songs Feat. DMX 1.1k votes These are the best songs featuring DMX. As a solo artist, DMX has won awards (American Music Award for Favorite Rap Artist),...
The Best DMX Albums of All Time 1.3k votes One of the most iconic and biggest personalities in hip hop, DMX is one of the greatest East Coast rappers of all time. Thro...
The Best DMX Movies 1.2k votes List of the best DMX movies, ranked best to worst with movie trailers when available. DMX is best known for hits like "...