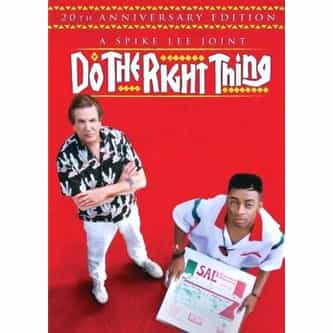 Tagline
It's the hottest day of the summer. You can do nothing
you can do something
or you can...

Do the Right Thing is a 1989 American comedy-drama hood film produced, written, and directed by Spike Lee, who also played the part of Mookie in the film. Other members of the cast include Danny Aiello, Ossie Davis, Ruby Dee, Richard Edson, Giancarlo Esposito, Bill Nunn, John Turturro, and Samuel L. Jackson. It is also notably the feature film debut of both Martin Lawrence and Rosie Perez. The movie tells the story of a neighborhood's simmering racial tension, which comes to a head and ... more on Wikipedia

Do the Right Thing IS LISTED ON