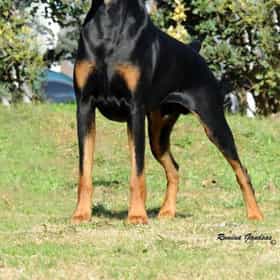 The Dobermann, (; German pronunciation: [ˈdoːbɐman]), Doberman or Doberman Pinscher in the United States and Canada, is a medium-large breed of domestic dog that was originally developed around 1890 by Karl Friedrich Louis Dobermann, a tax collector from Germany. The Dobermann has a long muzzle. It stands on its pads and is not usually heavy-footed. Ideally, they have an even and graceful gait. Traditionally, the ears are cropped and posted and the tail is docked. However, in some countries, it is illegal to do so. Dobermanns have markings on the chest, paws/legs, muzzle, above the eyes, and underneath the tail. Dobermanns are known to be intelligent, alert, and tenaciously loyal ... more on Wikipedia

Dobermann is ranked on...

#17 of 132 People who voted for Dobermann... also upvote Star Wars Franchise on The Best Movies of All Time The Very Best Dog Breeds, Ranked 205.7k VOTES List of favorite dog breeds, mainly gauged by the animals' suitability as pets in homes and apartments. Because of thousands...
#2 of 42 People who voted for Dobermann... also upvote Twilight Saga Franchise on The Most Overrated Movies of All Time The Best Dogs for Protection 8.9k VOTES List of the best dog breeds for protection, as ranked by dog owners and dog breed professionals. A dog may be man’s best fri...
The Most Popular Dog Breed In Each State 47.8k VIEWS Wherever you go in the United States, you're bound to find many amazing dog breeds. All dogs are perfect, which is why ...
These Are The Most Intelligent Dog Breeds, According To Research 55.1k VIEWS Not all dogs share the same level of intelligence, but before you ridicule a golden retriever for its dopey demeanor (or for...
Fascinating Photos Of What Dog Breeds Looked Like 100 Years Ago Versus Today 1.4M VIEWS Selective breeding means many of the dog breeds that are around today no longer look anything like what dogs used to look li...