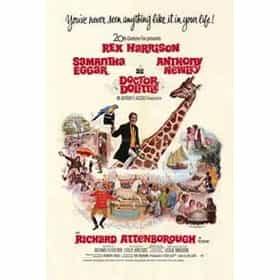 Doctor Dolittle is a 1967 American musical film directed by Richard Fleischer and starring Rex Harrison, Samantha Eggar, Anthony Newley and Richard Attenborough. It was adapted by Leslie Bricusse from the novel series by Hugh Lofting. It primarily fuses three of the books The Story of Doctor Dolittle, The Voyages of Doctor Dolittle, and Doctor Dolittle's Circus. The film had a notoriously protracted production with numerous setbacks along the way such as complications from poorly chosen shooting locations and the numerous technical difficulties inherent with the large number of animals required for the story. The film exceeded its original budget of $6 million by three times, and ... more on Wikipedia

'Doctor Dolittle' Was A Production Nightmare That Nearly Destroyed 20th Century Fox 11.9k views Animals are adorable and fun - there's no doubt about it. Like babies, they're cute and unpredictable, mostly in a good way....

Doctor Dolittle is ranked on...

Doctor Dolittle is also found on...