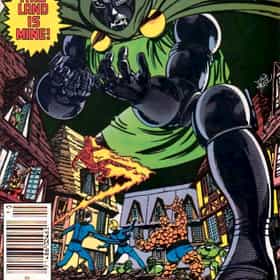 Doctor Victor von Doom is a fictional supervillain that appears in publications by Marvel Comics. The son of Romani witch Cynthia Von Doom, Doctor Doom is a recurring archenemy of the Fantastic Four, and leader of the fictional nation of Latveria. He is both a genius inventor and a sorcerer. While his chief opponents have been the Fantastic Four, he has also come into conflict with the Avengers and other superheroes in the Marvel Universe. Doctor Doom has made many appearances in video games, television series, and merchandise such as action figures and trading cards. He was ranked as the 4th Greatest Villain by Wizard on its 100 Greatest Villains of All Time list. IGN's list of the ... more on Wikipedia

Doctor Doom is ranked on...

#2 of 110 People who voted for Doctor Doom... also upvote Black Panther on The Greatest Marvel Avengers Characters of All Time also upvote Daredevil on The Best Comic Book Superheroes of All Time The Greatest Marvel Villains & Enemies Ever 405.8k VOTES The best Marvel villains are the men and women (not to mention any aliens, robots, and even siblings of heroes) at the root ...
#3 of 660 People who voted for Doctor Doom... also upvote Spider-Man on The Best Comic Book Superheroes of All Time also upvote Captain America on The Best Comic Book Superheroes of All Time The Best Comic Book Villains 270.1k VOTES Who are the best comic book villains of all time? This list of top supervillains in comics includes some of the most notorio...
#118 of 961 People who voted for Doctor Doom... People on the West Coast are 2x more likely to vote for this also upvote X-Men Franchise on The Best Superhero Movies Ever Made The Greatest Movie Villains of All Time 1.2M VOTES While some of us tend to despise movie villains, plenty of movie-goers favor some of these antagonists. Whether that's ...
#3 of 17 The Most Uncomfortable Masks In Comic Book History 342 VOTES With the exception of skintight costumes and flowing capes, no item of apparel screams "superhero" (or "super...
#9 of 20 Comic Book Characters Who Deserve R-Rated Adaptations 5.3k VOTES R-rated superhero movies don't always do well financially, but Deadpool and Logan achieved great box office s...
#14 of 125 The Best Comic Book Characters Created by Stan Lee 100.4k VOTES Stan "The Man" Lee is the most iconic and innovative comic creators of all time. He invented, or had a part in cre...
#40 of 52 The Most Powerful Characters in Marvel Comics 447.1k VOTES "Strength" in comic books is hard to qualify, or quantify. One character always has to be stronger than another or...
#4 of 80 The Greatest Avengers Villains of All Time 64.5k VOTES The Hulk, Iron Man, and Thor had been fighting crime separately in the pages of Marvel Comics, each having their own share o...
#6 of 42 The Best Iron Man Villains Ever 9.8k VOTES List of the most notorious villains from Iron Man's rogues gallery, as ranked by the fans. Iron Man/Tony Stark has a wide ar...
#3 of 12 Superheroes And Villains Who Wear Skirts 193 VOTES Impractical as it may be, the superhero skirt is a common costume. Particularly for superwomen, the skirt denotes a bit of f...
#20 of 72 List of Marvel Vs Capcom Characters 5.5k VOTES We compiled a list of all Marvel Vs Capcom characters across every MVC game. Characters in the Marvel Versus Capcom game ser...
#9 of 15 15 Comic Book Villains With Horrifying And Heartbreaking Origin Stories 18.5k VOTES Comic villains are responsible for some of the most heinous acts in all of fiction. They commit the sorts of graphic cr...
#3 of 20 The Best Archenemies in Marvel Comics 10.9k VOTES Archenemy, arch-rival, arch-nemesis whatever you want to call it, it's personal. The yin to the yang, the polar opposite, th...
#13 of 20 The Greatest Defenders Villains Ever 1k VOTES The Defenders are very much like the Avengers, and as such, share a fair amount of their villains. But The Defenders being s...
Your Favorite Marvel Characters: Where Are They Now? 1.3M VIEWS Marvel Comics has a celebrated 75+ year history in the comic book industry, having brought readers characters that have surv...
#6 of 77 Fictional Characters Named Victor 692 VOTES List of notable fictional characters whose name is Victor, including photos when available. The fictional characters named V...
The Complete List of Iron Man Villains and Enemies 83.1k VIEWS Tony Stark makes about as many enemies walking down the street, as Iron Man does fighting crime. Oh wait, they're one and th...
Which Marvel Villain Would You Be According To Your Zodiac Sign? 122.2k VIEWS There's no denying it - Zodiac signs are hella fun. There's an astrological symbol for each Justice League member as their i...
Which Supervillain Would You Be, According To Your Zodiac Sign? 99.5k VIEWS Darkness can't exist without light, similarly to how good can't exist without evil. For every superhero, there needs to be a...
15 Classic Examples of Chaotic Evil Characters 23.9k VIEWS “Chaotic evil (CE) creatures act with arbitrary violence, spurred by their greed, hatred, or bloodlust.” - Dungeons and Drag...
#9 of 27 Ranking Every Iron Man in the Comics 1.2k VOTES We're ranking every Iron Man in the Marvel comics universe. Along with all Iron Man incarnations that appeared in the c...
The Complete List of All Fantastic Four Villains and Enemies 36.2k VIEWS Whether out in space or down here on Earth, the Fantastic Four have our backs, even up against baddies like Mole Man and eve...
Top 100 Most Popular Superheroes and Villains in Comic Books 116.1k VIEWS These are the superhero (and villain) characters who have been in the most individual issues of comic books, including ...
Captain America's Enemies 53.3k VIEWS Marvel Comics's Captain America (Steve Rogers) has been fighting off bad guys since World War II. Here is a full list of all...
#6 of 14 Ranking Every Daredevil in the Comics 146 VOTES We're ranking every Daredevil in the Marvel comics universe. Along with all Daredevil incarnations that appeared i...

Doctor Doom is also found on...