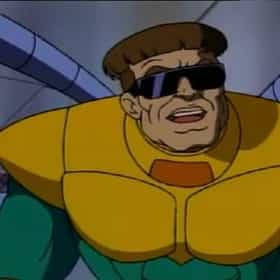 Doctor Octopus, real name Dr. Otto Gunther Octavius and also known as Doc Ock, Doc Octopus and the Superior Spider-Man, is a fictional character, a supervillain that appears in comic books published by Marvel Comics. A highly intelligent mad scientist, Doctor Octopus is one of Spider-Man's greatest foes. He is typically portrayed as a stocky, myopic man who utilizes four powerful, mechanical appendages, and is obsessed with proving his own genius and destroying Spider-Man. In his first several appearances, his last name was spelled "Octavious" while all stories since have spelled it "Octavius". The character has appeared in numerous Spider-Man cartoons and video ... more on Wikipedia

What Happened When Doctor Octopus Took Over Spider-Man's Body And Tried Being A Hero? 1.6k views The Superior Spider-Man comic book series - in which Doctor Otto Octavius takes over Spider-Man’s body and fills the role of...
Forget Green Goblin - Doctor Octopus Is Spider-Man's True Arch Nemesis 342 votes Spider-Man has the best rogues’ gallery in comics this side of Batman, but at the core of it lies an intense rivalry that ha...

Doctor Octopus is ranked on...

Doctor Octopus is also found on...