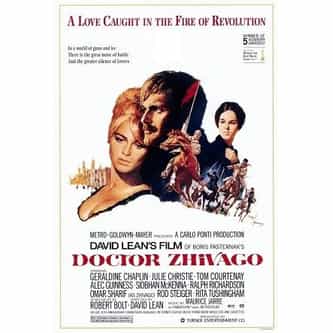 Tagline
A Love Caught in the Fire of Revolution.
Turbulent were the times and fire was the love story of Zhivago
his wife and the passionate
tender Lara.

Doctor Zhivago is a British-American 1965 epic dramaromance film directed by David Lean, starring Omar Sharif and Julie Christie. It is set in Russia between the years prior to WWI, and is based on the Boris Pasternak novel of the same name, immensely popular in the West, but banned in the Soviet Union at the time. For this reason, the film could not be made there and was instead filmed mostly in Spain. The critics were generally disappointed, complaining of its length at over three ... more on Wikipedia

Doctor Zhivago IS LISTED ON