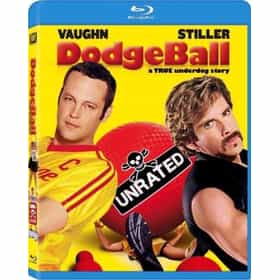 DodgeBall: A True Underdog Story, commonly referred to as DodgeBall, is a 2004 American sports comedy film produced by 20th Century Fox and Red Hour Productions, written and directed by Rawson Marshall Thurber and starring Vince Vaughn and Ben Stiller. The film focuses on a rivalry between the owners of Average Joe's, a small gym, and Globo-Gym, a competing big-budget gym located across the street. Peter LaFleur, the owner of the smaller gym, has defaulted on his mortgage and enters a dodgeball tournament in an attempt to earn the money necessary to prevent his gym from being purchased by Globo-Gym to build a new parking lot for their gym members. Globo-Gym enters a team in the ... more on Wikipedia

DodgeBall: A True Underdog Story is ranked on...

DodgeBall: A True Underdog Story is also found on...