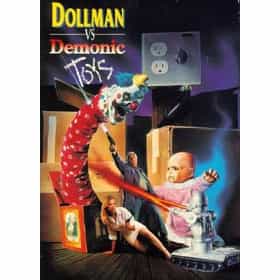 Dollman vs. Demonic Toys is an American low-budget, independent 1993 horror film in the B movie category, that went straight to video and never had a theatrical release. It is a continuation of three films released by Full Moon Features: Dollman, Demonic Toys and Bad Channels. Much of the movie consists of flashbacks from the three prequels, aimed to enhance the story and promote the earlier movies. This film was followed by Puppet Master vs. Demonic Toys in 2004 with alternate designs for the toys, which initially aired on Syfy. In 2009, an actual sequel to the first film, titled Demonic Toys 2, was released, which means Dollman vs. Demonic Toys is either no longer canonical or simply ... more on Wikipedia

Dollman vs. Demonic Toys is ranked on...

#33 of 38 The Best Horror Movies About Puppets and Dummies 1k VOTES Puppets are already creepy enough on their own, but horror movies about puppets take it to another level. This list ranks th...
#63 of 162 The 100+ Best Action Movies for Horror Fans 1.1k VOTES Are you ready for some frightening action-packed movies? These scary action films are the best that the hybrid genre has to ...
#2 of 20 The Best Tracy Scoggins Movies 111 VOTES List of the best Tracy Scoggins movies, ranked best to worst with movie trailers when available. Tracy Scoggins's highest gr...

Dollman vs. Demonic Toys is also found on...