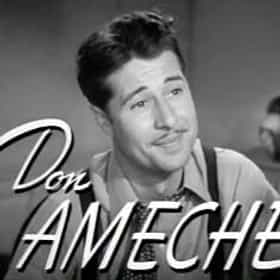 Don Ameche (; born Dominic Felix Amici; May 31, 1908 – December 6, 1993) was an American actor, voice artist and comedian. After playing in college shows, stock, and vaudeville, he became a major radio star in the early 1930s, which led to the offer of a movie contract from 20th Century Fox in 1935. As a handsome, debonair leading man in 40 films over the next 14 years, he was a popular star in comedies, dramas, and musicals. In the 1950s he worked on Broadway and in television, and was the host of NBC's International Showtime from 1961 to 1965. Returning to film work in his later years, Ameche enjoyed a fruitful revival of his career beginning with his role as a villain in Trading ... more on Wikipedia

Don Ameche is ranked on...

#154 of 1,148 The Best Actors in Film History 2.2M VOTES The best actors ever are ranked here in this list of the best actors in film history. These are the greatest actors ever to ...
#400 of 2,003 People who voted for Don Ameche... People over 50 are 2x more likely to vote for this also upvote Twilight Saga Franchise on The Most Overrated Movies of All Time The Greatest Actors & Actresses in Entertainment History 1.7M VOTES The best actors and actresses of all time, male and female, ranked by film fans worldwide. This list of greatest actors and ...
The Locations of All Hollywood Walk of Fame Stars 418.7k VIEWS A list of stars on the Hollywood Walk of Fame, with photos. This list includes all television and movie stars. Acquiring a s...
#16 of 23 The Greatest Golden Girls Guest Stars, Ranked 3.6k VOTES The Golden Girls ran for seven seasons, earned 68 Emmy nominations, tackled social issues, and created a diehard following t...
Famous People Named Donald or Don 27.2k VIEWS List of famous people named Donald, along with photos. How many celebrities named Don can you think of? The famous Donalds b...

Don Ameche is also found on...