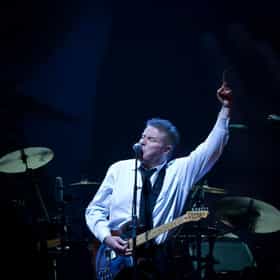 Donald Hugh Henley (born July 22, 1947) is an American musician, singer, songwriter, record producer and founding member of the Eagles. He was the drummer and co-lead vocalist for the Eagles from 1971 until the band broke up in 1980, and he reprised those duties for the group's reunions since 1994. He has been the only constant member of the band since its formation. Henley sang the lead vocals on Eagles hits such as "Witchy Woman", "Desperado", "Best of My Love", "One of These Nights", "Hotel California", "Life in the Fast Lane", "The Long Run" and "Get Over It". After the Eagles broke up in 1980, Henley ... more on Wikipedia

The Best Don Henley Albums of All Time 109 votes Don Henley isn't just part of one of the rock bands of all time, but is also one of the best solo artists as well. List of t...

Don Henley is ranked on...

Don Henley is also found on...