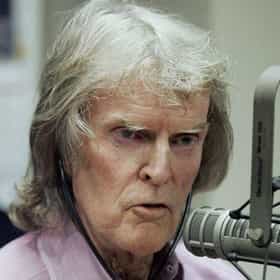 John Donald Imus Jr. (July 23, 1940 - December 27, 2019) is an American former radio personality, television show host, recording artist, and author. He is known for his radio show Imus in the Morning which aired on various stations and digital platforms nationwide until 2018. He attended broadcasting school in the 1960s and secured his first radio job in 1968 at KUTY in Palmdale, California. Three years later, he landed the morning spot at WNBC in New York City; he was fired in 1977. In 1979, Imus returned to WNBC and stayed at the station until 1988 when the show moved to WFAN. He gained widespread popularity when the show entered national syndication in 1993. He was labelled a ... more on Wikipedia

Don Imus is ranked on...

Celebrities Who Died In 2019 142.1k VIEWS UPDATED: Read about the celebrities who died in 2020.  Nobody likes to be surprised by learning about a beloved celeb...
Famous People Named Donald or Don 27.4k VIEWS List of famous people named Donald, along with photos. How many celebrities named Don can you think of? The famous Donalds b...
53 Celebrities Who Have Been Homeless 671.5k VIEWS List of famous people who were homeless, loosely ranked by fame and popularity. A surprising number of famous actors, sing...
EW.com's Hollywood's Most Scandalous Celebs 11.8k VIEWS EW's list of the most notorious and scandalous celebrities of the last 20 years. These people have caused the biggest cele...

Don Imus is also found on...