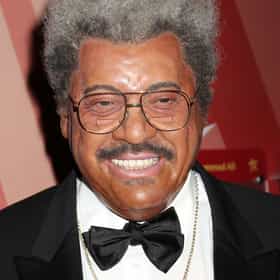 Donald King (born August 20, 1931) is an American boxing promoter known for his involvement in historic boxing matchups. He has been a controversial figure, partly due to a manslaughter conviction (later pardoned), and civil cases against him. King's career highlights include, among multiple other enterprises, promoting "The Rumble in the Jungle" and the "Thrilla in Manila". King has promoted some of the most prominent names in boxing, including Muhammad Ali, Joe Frazier, George Foreman, Larry Holmes, Mike Tyson, Evander Holyfield, Julio César Chávez, Ricardo Mayorga, Andrew Golota, Bernard Hopkins, Félix Trinidad, Roy Jones Jr., Azumah Nelson, ... more on Wikipedia

Don King is ranked on...

#63 of 1,445 Celebrity Death Pool 2018 477.7k VOTES Welcome to Celebrity Death Pool 2018! In increasingly uncertain times, there remains one constant in life - we all die. Cele...
Famous People Named Donald or Don 27.9k VIEWS List of famous people named Donald, along with photos. How many celebrities named Don can you think of? The famous Donalds b...
Celebrities Who Have Been Busted For Tax Evasion 111.6k VIEWS This list contains information about celebrities who have experienced tax trouble, loosely ranked by fame and popularity. ...
12 Celebrities Who Turned Down The Simpsons 8.5k VIEWS Millions of years from now, when Earth is nothing but a desert wasteland void of all humanity, they will still be making new...

Don King is also found on...